Click the Title to open the extract
Try the Search Tool
Tip: Use Ctrl + f to search this page
See also:
* Irish Pedigrees

PEDIGREE RESOURCES:
* The Books of Genealogies and Pedigrees
Lectures at the Catholic University of Ireland 1885/6
By Eugene O'Curry, M.R.I.A. (Dublin, 1878) - IA

* Catalogue of the Heralds' Visitations:
with references to Many Other Valuable Genealogical and Topographical Manuscripts in the British Museum; section on Ireland from p. 93
Printed for James Taylor (London, 1825) - HT

* A Catalogue of Pedigrees Hitherto Unindexed
some of Irish interest
By George William Marshall (London, 1867) - OL

* The Clan Gibbon of Umall (Table XI) in: History of Mayo

* The Clans of Hy Briuin of Connaught (Table VIII) in: History of Mayo

* Clann David and Clann Walter of Corcamoe in: History of Mayo

* Clann Philip of Mayo (Table X)  in: History of Mayo

* Clann Seonin in Kilmane (Table IX)  in: History of Mayo

* Coleman's General Index to Printed Pedigrees - 1866
which are to be found in all the Principal County and Local Histories and in many Privately Printed Genealogies under Alphabetical Arrangement
Pub. by James Coleman (London, 1866) - OL

* Debrett's Peerage of Ireland
Section on Ireland in 'The Peerage of the United Kingdom of Great Britain and Ireland' - Vol II
By John Debrett (London, 1820) - IA

* Genealogiae Regum et Sanctorum Hiberniae
(Genealogy of Kings and Saints of Ireland) by The Four Masters, edited from the manuscript of Michel O'Cleirigh with appendices and an index; Preface in English, text in Irish
By Rev. Paul Walsh, M.A. (Maynooth, 1918) - OL

* The Genealogist's Guide to Printed Pedigrees

* Genealogy of Clann Goisdelbh (Table XVIII) in: History of Mayo

* Guide to Printed Books and Manuscripts relating to English and Foreign Heraldry and Genealogy
being a classified catalogue of works of those branches of literature
By George Gatfield (Only 300 Copies Printed, London, 1892) - HT

* The Hy Briuin Ai (Table IX) in: History of Mayo

* An Index to the Pedigrees in Burke's Commoners
Originally prepared by Mr. George Ormerod in 1840 (Oxford, 1907) - OL

* An Index of The Pedigrees contained in the Printed Heralds' Visitations
etc., etc.; England and Wales
By George W. Marshall, LL.M. (London, 1866) - HT

* The Irish Genealogical System (Table IV) in: History of Mayo

* The Pedigree Directory 1917
A List of Pedigrees and of those interested in Pedigrees
George Sherwood (London, 1917) - IA

* The Race of Dathi. Hy Fiachrach Muaidhe (Table VII) in: History of Mayo

* Revised View of Early Tribal Relations (Table I) in: History of Mayo

* Sliocht Ulick of Umall (Table XII) in: History of Mayo

* The Silmurray Clans (Table X) in: History of Mayo

* * Visitation of Ireland - Six Volumes in One
List of Pedigrees
By Joseph Jackson Howard and Frederick Arthur Crisp (Reprint, USA? 1973 - Preview Only) - GB

Small Print
This site is an index of eBooks. The eBooks themselves are held on various host sites whose rights are acknowledged. All books listed are believed to be "out of copyright" or otherwise freely available to download and/or read online. Compilation, text and layout (c) 2011 - 2017 P.J. Clarke.

This site is part of
Free Irish eBooks


From the compiler of Free Irish eBooks: 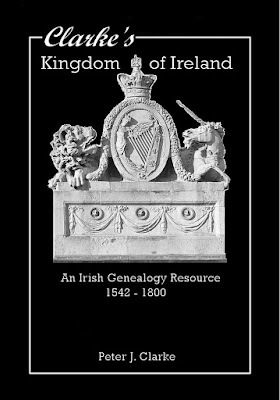 Peter J. Clarke
My objective is to build the biggest index of freely available eBooks (or 'e-Books' if you prefer) on Irish History, Biography and Genealogy! The eBooks are listed in a wide range of categories. My surname project is called The Earliest in Ireland - One-Name studies (before 1800). Post feedback on the Facebook page www.facebook.com/freeirishgenealogyebooks or email: freeirishebooks@gmail.com. Follow on Twitter @FIGeBooks